I moved out to Los Angeles in March of last year to be closer to my daughter. It’s a decision I’ve never regretted. Our relationship has grown much closer over that time and I’ve found that having more of her in my life has really made me a happier person. In terms of employment, I made an unusual decision in my move; I decided that I would stay involved with my mother’s Dallas-based business (at half my Dallas salary) and use poker to make up the difference. This was a controversial decision a number of people in my life, but its one my mother has always supported. 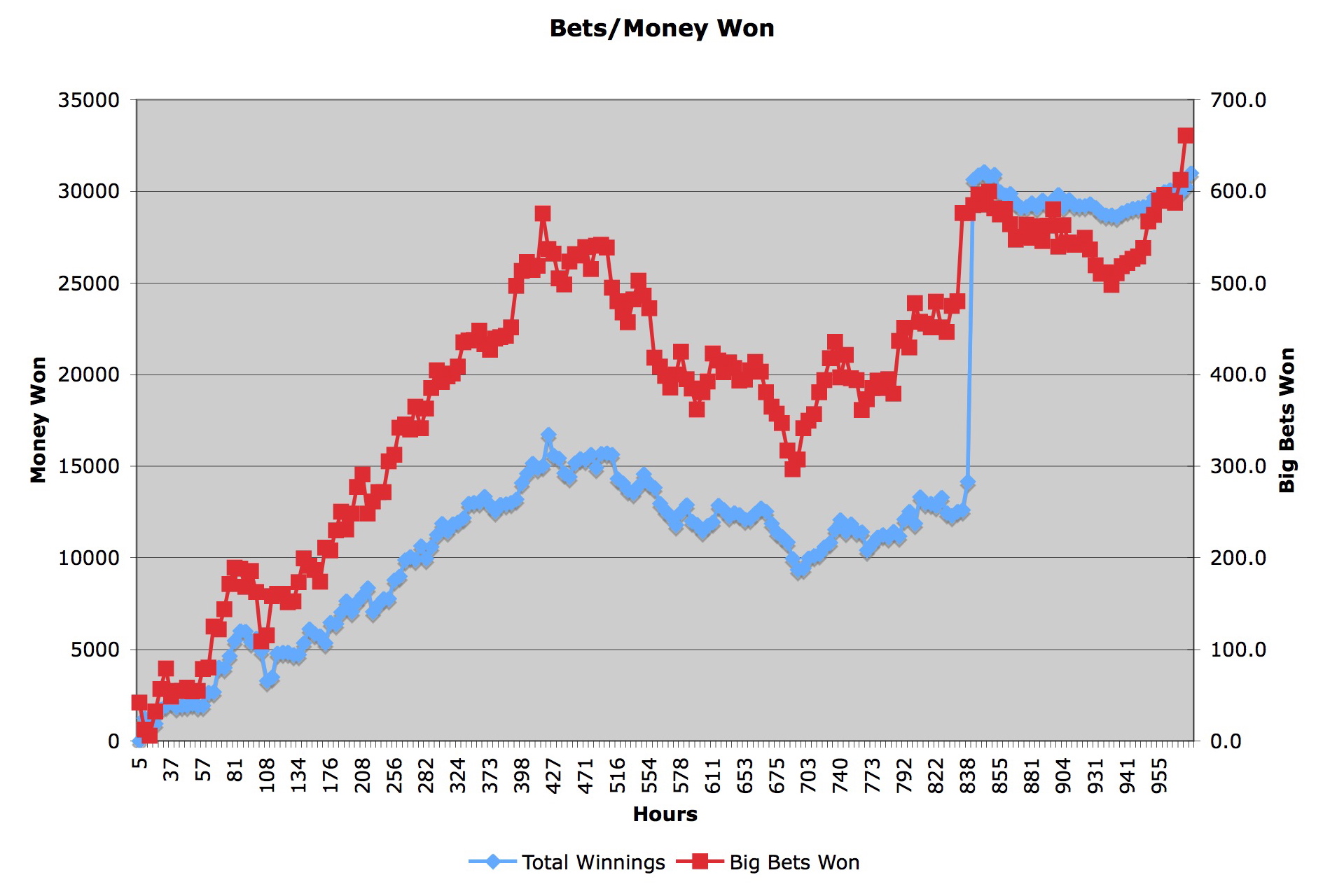 The general rule among poker players is that a professional player whose long-term expected earnings are at one big-bet per hour will need a bankroll of 300 big bets or so to ride out the downswings. That’s the general rule that is derived by using the three-standard deviations rule of statistics to say that no run of luck should cause a series of losing sessions that run that long. Three standard deviations is a standard that’s inherited from Statistical Quality Control to indicate that something abnormal is happening in a process because the likelihood of such an event happening purely by chance is less than 97.5%.

97.5% is a good investigative tool when you’re a quality manager looking to investigate why a particular batch came out so far from the normal one, but, as Mark Blade points out in his book Professional Poker: The Essential Guide to Playing for a Living 97.5% is not a high enough standard is you want to earn your living as a professional player. After all, who other industry professionals would want to follow a standard practice that promised them a 2.5% chance of not being able to practice their profession at any given time.

Of course, as Mike Caro says in the book that has become my poker bible, Caro’s Most Profitable Hold’em Advice you don’t really need to be as conservative with a small bankroll as you do with a large one. If you’re playing an $8-16 game and set aside $4,800 as your poker bankroll (300 x $16 = $4800) then you’re just not as concerned about losing that bankroll as you would be if you we were talking about a $40-80 bankroll of $30,000 or so. The $4,800 bankroll can be replaced easily enough by non-poker means (i.e. getting a real job and saving for a few months).

My experiences in my first 1000 hours were far wilder than I would have anticipated. What sense does it make that I would get a winning streak for 400 straight hours followed immediately by a losing streak for the next 300 hours? I lost roughly 250 big bets over that losing streak, which is within the 300 big bet requirement of the general rule, but when you’re living actually living through it it can be hard to keep your head together. The thinking isn’t, “Wow, I must really be unlucky,” but instead becomes “Wow, I must really be a bad player.” At least, that’s how the thinking went for me, because I didn’t really have a long poker track record to look back over and draw confidence from.

Of course, I also knew that I was playing a better game than I was in the first 400 hours because I was growing in experience, but the results you get at the table are always either far worse or far better than the level of play you’re putting into it. Over the long term, things even out, but the uncertainty can get the better of you sometimes.

At any rate, I finished my first thousand hours with an average win of .7 big bets. Not quite the 1 big bet I was looking for, but I am just getting started after all. .7 big bets translates to $11.20/hour in a $8-16 game or $21 per hour in a $15-30 game, and, in this economy, it really feels good to have a source of income that someone else can’t take away from me at whim. It may not be the ridiculous amounts of money you see people staking up at the end of the World Series of Poker’s Main Event, but it’s decent money derived from a game that I greatly enjoy during a time when a lot of people around me are losing their jobs. It’s strange that my decision to become a poker player seems to have given me more job security than all the people who slaved away at their day jobs, but I must say I do enjoy the irony.